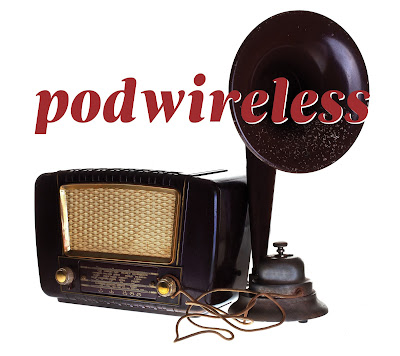 **SCROLL DOWN FOR POSTAL ADDRESS UPDATE.

Podwireless is an expanded version of ye olde fRoots Radio (RIP), a monthly two-hour podcast of new releases from the world of folk, roots and associated weirdos that began in 2002 as a service for the readers of fRoots magazine (RIP). Since the magazine's closure in 2019 it has continued in much-expanded form. It's now often to be found in the top 5 folk, roots, acoustic and world music podcasts.

Before that I’d done many years on ‘conventional’ radio, starting on local radio in Surrey in the early 1980s, presenting various series for BBC Radio 2, Capital Radio and the original World Routes on Jazz FM, depped for Andy Kershaw on BBC Radio 1, and had a 12 year stint presenting Folk Routes on the BBC World Service. You can read more about that and find some links to ancient programmes delivered in my scarily youthful voice at https://www.ianaanderson.com/broadcast

The aim of pretty much everything I’ve ever done in broadcasting has been to give exposure to music that enthuses me, much of which gets very little other chance for airplay. I try not to talk too much, and have always provided playlists to help listeners track down records they’d like to buy. In my BBC World Service days I used to get a bonkers mailbag from all over the planet, sometimes – I was told – more than the pop/rock music request show got. Virtually all of it was enquiries to ID something I’d played and to give a source for it. That’s all so much easier since they invented the interweb, and what this playlist & links site is for.

Q: How do I get my album considered for Podwireless?

If you’re really not sure if the music you make is suitable, you can email me at podwireless@outlook.com – but why not just give a programme a listen so you can judge for yourself?! And it shouldn’t need saying, but I do give special attention to small independent labels.

Please note that I generally only have time to include new releases, and preferably from finished CD copies with full notes and packaging. Sorry, but unless it’s a digital-only release or overseas postage costs are prohibitive from your location I prefer to avoid the extra faff of downloading and filing (and then promptly losing) digital tracks – and I can't play vinyl.

Please always include the best web link to the release, artist or label so that I can include one of those in the playlists. Bandcamp links are favourite. And all I really need is a simple biography – what our colonial cousins call a “one sheet”, not reams of reviews. Save a tree!

Q: Podwireless seems to be free. How is it funded?

A: It’s a labour of love and public service netcasting which runs entirely on donations of spare change from supporters – see the Tip Jar link at the top of the column on the right, or go to https://www.paypal.me/unmanage . Suitable CDs to play (see above), teacakes and coffee are also vital!


Q: Clearance and permissions for playing?

A: By sending a CD to Podwireless, it is assumed that you are automatically granting permission for one or more tracks to be played for promotional purposes. Our main platform Mixcloud states that they pay royalties though how they calculate what, to who and how is not clear. Let's just assume that you're happy to get a free promotional play or two. After all, it's not like Sp*tify streams will buy you any hot dinners!

Q: Before I send you my CD, what sort of music will you actually play?

A: As a simple guide, music, however ancient or modern, that has some clear roots in a folk tradition from somewhere out there. Neither the instruments or level of technology employed nor an artist’s nationality are particularly relevant. For example, neither the act of playing an acoustic instrument or singing in a language other than English have a major significance either way. It ain’t how you do it, it’s what you do!

A: Possibly not, unless your music is strongly influenced by a tradition. The musik biz categorises anybody with an acoustic guitar who writes their own songs as ‘folk’. Which is fine, call it whatever you like, but Podwireless may not have space for it.

Q: Hey dude, I do Americana? Do you play that?

A: A little, but with so much great local roots music to cover from around a world that is fighting back against global cultural imperialism, plus the explosion in self-published CDs in the wealthy nations, I simply can’t shoehorn everything in. I play what you could call local, regional or traditional American musics: country blues, Cajun, conjunto, old-time, Appalachian, musics of established immigrant communities, but only music made by current writers if they are clearly rooted in such traditions. I don’t really have space for music that has no sense of roots, place or community: for example singer/songwriters who are essentially just playing acoustic rock music with a country twang, mainstream Nashville country, blues rock, amorphous music that could come from anywhere. And spare me the stuff about dolphins . . . Sorry!

Q: Does my CD need UK distribution for you to include it?

A: No. Podwireless is listened to worldwide and the chances are that your CD can be bought somewhere in the world over the interweb. Getting a play in Podwireless might even help gain UK distribution and open the doors to becoming known here.

But please note if you are sending CDs from abroad, please put the value at which you are declaring them for customs as the basic manufacturing cost, e.g. from USA two dollars per CD, not the full retail price. Otherwise it will incur a customs charge and I won’t be able to accept the item from the post office. You should also write on the outside of the package that it is a free promotional sample.

A: Nah. Not even an all-expenses paid sweeney to the South Pacific (I've sworn off flying anyway). Not even teacakes…