5. Trad.Attack! : Miks Te Ei Laula? from the CD Make Your Move (Made In Baltics) tradattack.ee


14. Jola : Ulad L Ghaba (The Children Of The Forest) from the CD Hidden Gnawa Music In Brussels (Muziekpublique) muziekpublique.be


15. Aunt Molly Jackson : Roll On Buddy from the CD Songs Of Hard Times: Up, Over & Through (Alan Lomax Archive) alanlomaxarchive.bandcamp.com


24. Nancy Wallace : She Dreams Of Maps from the CD Weirdshire 3 – A Cure Of Souls (Sproatly Smith) sproatlysmith.bandcamp.com


25. Brigid Mae Power : The Blacksmith from the CD Head Above The Water (Fire) firerecords.com


29. Manhu : Moon from the CD Voices Of The Sani (Riverboat) worldmusic.net


37. Will Pound : Scottish a Virmoux/ SBrando from the CD A Day Will Come (Will Pound) willpound.com

Podwireless has acquired the back issue stock of fRoots Magazine as well as control of the magazine's archive web site.

While back issues last, you can still buy them from:
frootsmag.com/froots-back-issues

Such sales help contribute to the running costs of the Podwireless podcast!
Posted by Podwireless at 09:50 No comments: 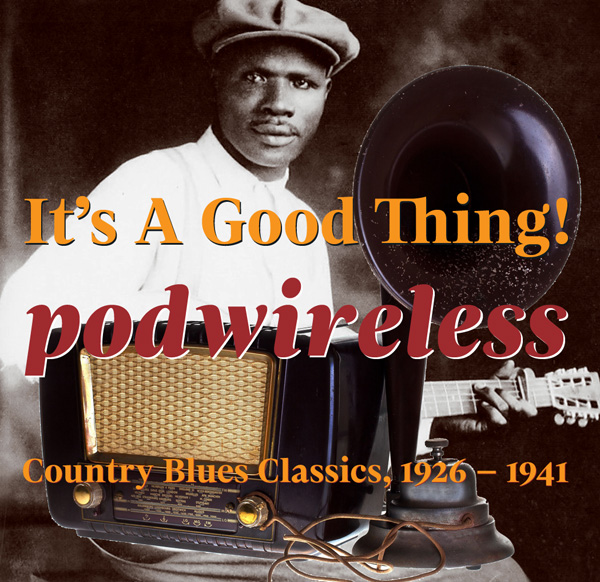 If you’re a gnarly old blues mouldye fygge you’ll know and love all this music anyway (though you might enjoy having this couple of hours strung together to save you doing the shelf work). This isn’t really for you though. It started as a cassette (!) compilation that I put together back in the last century when I realised that this music was falling off the radar of some younger friends, especially those going to UK folk clubs where country blues which had been a major element in the 1960s had virtually vanished off the radar. Then about a decade back I reassembled it all for a couple of CDRs to keep in the car.
So what is this that you’ll hear through the surface noise of ancient scratchy 78rpm records? It’s folk music but it’s also pop music, often dance music (artists like Charlie Patton could reputedly entertain dancing revellers all night, without amplification), mostly made for the African-American population in the southern USA between the mid 1920s and the onset of WWII – with the greatest concentration in the few years from 1927 to ’30 when the Great Depression slowed the fledgling recording industry. These were commercial records – often released on what were classified as ‘Race Records’ – of a newly emerged art form. Some of them were by older artists like Henry Thomas or Frank Stokes (sometimes classed as ‘songsters’) whose core repertoire harked back to earlier days in the previous century.

It’s mostly played on guitars, mostly by men (with the exception of Memphis Minnie, Lottie Kimbrough and Geeshie Wiley here), mostly by black men (other than Dock Boggs, Dick Justice and Frank Hutchison here) and it’s also music of the first generation who could be influenced by records and the radio as well as hearing other musicians in person. It’s the roots of later artists like Muddy Waters and Howlin’ Wolf, who in turn became the inspiration for even later white ones like The Rolling Stones, Cream and ever onwards. It’s the deep roots of much rock music of the later 20th century and onwards.

On a personal note, you’ll hear loads here that profoundly influenced English folk club musicians of the 1960s generation – not just us blues boomers like myself, Jo Ann Kelly, Dave Kelly, Mike Cooper and all, but everybody through Davy Graham, Wizz Jones, John Renbourn and on to the people who created the classic English folk guitar styles like Martin Carthy (who always credits Big Bill Broonzy as a major influence on his thumb work). We were really lucky that quite a few of the original artists like Son House, Skip James, Bukka White, Big Joe Williams, Sleepy John Estes and more were still alive and came to the UK on tour so we could – sometimes literally – sit at their feet.

If you know my own repertoire down the years, you’ll hear lots of tunes, riffs, lines and verses, slapped strings, syncopation, foot pounding and bottleneck ideas that have entered my music by osmosis, even though the songs are no longer country blues in form and my accent stopped being a bad attempt at a southern US one way back in the early 1970s (full credit to our national folk treasure Shirley Collins for inspiring that change). “Cultural appropriation” hadn’t been invented as a Bad Thing back then: we just absorbed things which we heard, loved and struck a (loud, often open G!) chord.

Here’s hoping this opens a few more ears and is a tiny blow against the 21st English folk music tendency towards twee!
And yes, it’s alphabetical. For some strange cosmic reason, it works!

Many of these tracks are available in different combinations on multiple re-issue compilation CDs: check the catalogues of labels like Document, Yazoo, World Music Network, Indigo, Catfish. Particular thanks to the Origin Jazz Library re-issue LPs of the early 1960s which, after the legendary Folkways Harry Smith anthology, opened the ears of my generation to all this music. Really! The Country Blues.


Podwireless is available for free: it’s a labour of love and public service netcasting. If you would like to make a voluntary contribution to its running costs, see the Tip Jar link at the top of the column on the right, or just go to
https://www.paypal.me/unmanage

Posted by Podwireless at 17:24 No comments: