(This playlink is to Mixcloud streaming:  you can also download the podcast from Podomatic )

2. Jumpleads : False Knight On The Road from the DL album The Stag Must Die (Ock) Bandcamp

4. Piers Faccini feat. Ben Harper & Abdelkebir Merchane : All Aboard from the CD Shapes Of The Fall (Nø Førmat) Website

8. Jackie Oates : Rolling Of The Stones from the DL single (Lush Spa) Website

14. Black Patti : Get On The Road To Glory from the CD Satan's Funeral (Rhythm Bomb) Website

15. The Ukulele Uff & Lonesome Dave Trio : I Lost My Gal From Memphis from the CD Breezin' Along With The Breeze (Ukulele Uff Trio) Website

28. Kasai All-Stars : Olooh, A War Dance For Peace from the CD Black Ants Always Fly Together, One Bangle Makes No Sound (Crammed) Bandcamp

29. Jumpleads : Tom Cave's from the DL album The Stag Must Die (Ock) Bandcamp

Posted by Podwireless at 10:46 No comments: 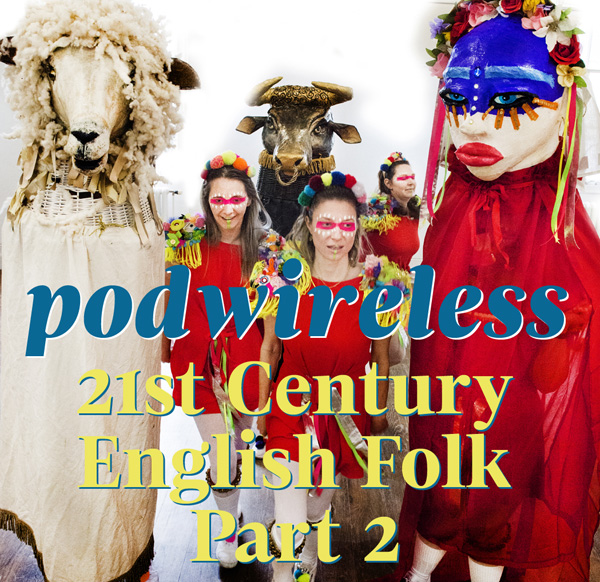 This programme is the second of two song-lead companion pieces to last June's No Voices (England) which showcased instrumental tracks by English musicians. Part 1 went live in February. They're natural successors to my Rough Guide To English Folk and Looking For A New England compilation CDs of a decade back.

4. Bird In The Belly : Irish Emigrant from the CD The Crowing (GFM) Website

7. Alula Down : Master Kilby from the CD Homespun (Alula Down) Bandcamp

8. This Is The Kit : Spores All Settling from the CD Bashed Out (Brassland) Website

11. Nancy Wallace : Joy To The World from the CD Old Stories (Midwich) Bandcamp

18. Jackie Oates : Lark In The Morning from the CD The Violet Hour (﻿Chudleigh Roots) Bandcamp

23. Sam Lee : The Ballad Of George Collins from the CD Ground Of Its Own (Sam Lee) Website

Posted by Podwireless at 10:43 No comments: